A Thank You Letter from the Egyptian Government

A couple of days ago, I received a thank you letter that is dedicated to my beloved eSpace, and the team of volunteers behind www.estefta2.eg. The letter was from MSAD, "Ministry of State for Administrative Development", Although I had not expected such a thing, but it felt nice.

The story goes back to last month, about 10 days before the referendum on the Constitutional Amendments. I was, along with other eSpacians, notified that there is an urgent need for the referendum website. Everyone of us had his own running project, tight schedule and deadline.. So it was key clear that doing this means volunteering our own after-work-hours time.

We were so excited because we've always wished to contribute in building the country, in our own field, Web Development.

We were a little bit concerned about working with the government due to the expected bureaucracy, But the team of MSAD that we dealt with was really cooperative and worked with the same spirit that we did. We were also concerned about deploying to data centers in Egypt (specially those belonging to the government). But Spirula, stepping in for the server management, made us very comfortable that we're properly backed up.

I took the role of the Development TL It was very tricky that members were from different eSpace teams, each having his/her own priorities and time schedule. I had to utilize each of them, and allow tasks to be shuffled smoothly. Thankfully, with little overhead on project management, I was able to contribute in a large portion coding as well.

The outcome was awesome. We really felt we provided value. I Enjoyed working with my fellow eSpace developers & MSAD data team on this. and I really loved such experience from all aspects. 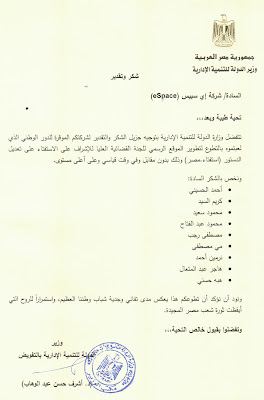